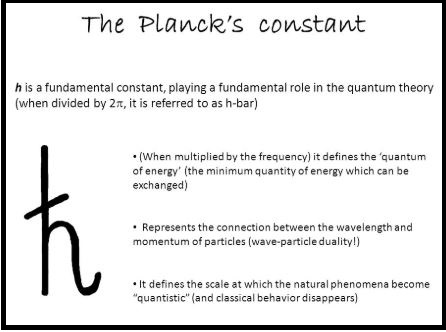 Planck constant, (symbol h), fundamental physical constant characteristic of the mathematical formulations of quantum mechanics, which describes the behavior of particles and waves on the atomic scale, including the particle aspect of light.

The German physicist Max Planck introduced the constant in 1900 in his accurate formulation of the distribution of the radiation emitted by a blackbody, or perfect absorber of radiant energy (see Planck’s radiation law).

The significance of Planck constant in this context is that radiation, such as light, is emitted, transmitted, and absorbed in discrete energy packets, or quanta, determined by the frequency of the radiation and the value of Planck’s constant.

The energy E contained in a photon, which represents the smallest possible 'packet' of energy in an electromagnetic wave, is directly proportional to the frequency f according to the following equation:

» World gets new units of measurement of Kilogram, Kelvin, Mole, and Ampere