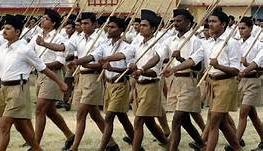 RSS will organize a 25-day camp on June 7

Former president Pranab Mukherjee will address members of the Rashtriya Swayamsevak Sangh (RSS) at its headquarters in Nagpur on June 7.

The invitation was extended to the former President to address RSS workers in Nagpur and he has accepted it.

Details of the visit

The Siksha Varg - education wing of the RSS - will organize the concluding session of a 25-day camp in which Mukherjee would be the chief guest.

Mukherjee and Mohan Bhagwat, the RSS head, will speak to over 600 newly-recruited cadres who will demonstrate what they learned at the camp.

Mukherjee, 82, demitted office of president in July last year and has been a Congressman for decades having worked closely with former Prime Minister Indira Gandhi as well as Rajiv Gandhi.

The RSS chief has met Mukherjee thrice during his tenure as President.

» Pranab Mukherjee's farewell and achievement as President of India