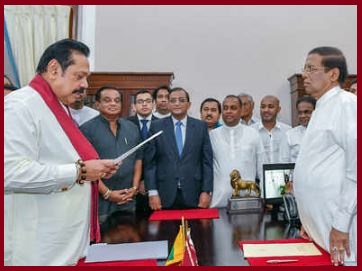 Mahinda Rajapaksa was born on 18th November 1949 in the southern province of British Sri Lanka.

At present, Sri Lanka's politics is in turmoil because of the tension between President Sirisena and PM Wikramasinghe. In a sudden move, the United People’s Freedom Alliance (UPFA), the Political Front of President Mittipala Sirisena, withdrew support from the coalition government with Ranil Wickramasinghe's Party United National Party (UNP).

This coalition government was formed in the year 2015 when Sirisena became President by the support of Ranil Wikramasinghe.

This sudden move also indicates a constitutional crisis lurking in Sri Lanka. According to the 19th Amendment to the Sri Lankan Constitution, Wikramasinghe could not be removed from the post without the majority.