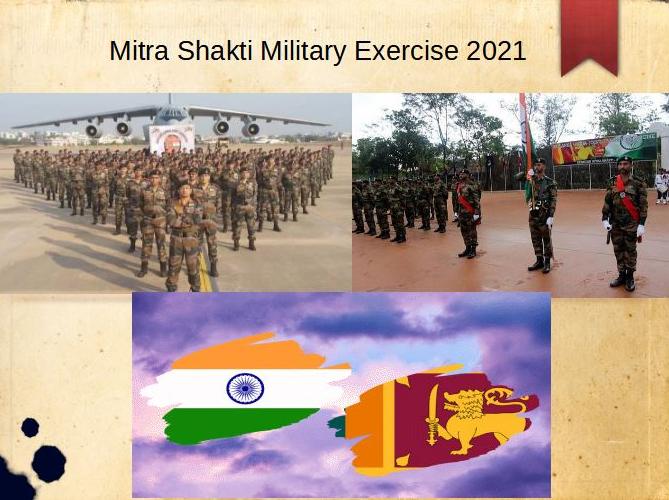 India and Sri Lanka will conduct a 12-day military exercise aimed at boosting counter-insurgency and counter-terrorism cooperation. According to the defense ministry, the exercise will include an all-arms contingent of 120 Indian Army personnel as well as a battalion-sized contingent of the Sri Lankan Army. "The exercise's goal is to establish closer ties between the military of both countries, improve interoperability, and share best practices in counter-insurgency and counter-terrorism operations," according to the statement.

The eighth edition of the Mitra Shakti exercise will take place from October 4 to 15 at the Combat Training School in Ampara, Sri Lanka, according to a statement released by the defense ministry on Saturday. On Sunday, an Indian Army detachment arrived in Sri Lanka to take part in the Mitra Shakti exercise. The Indian Army tweeted on Sunday, "Exercise #MitraShakti21. #IndianArmy personnel participating in Exercise Mitra Shakti 21 arrived in Sri Lanka and was greeted with a traditional welcome by the Sri Lankan Army."

According to the defense ministry, the combined exercise is aimed to incorporate the contemporary dynamics of UN peacekeeping missions through tactical exercises and practical discussions. The exercise will feature tactical level operations at the sub-unit level in an international counter-insurgency and counter-terrorism environment, according to the ministry, and will go a long way toward further cementing the partnership between the two countries. It will serve as a catalyst for fostering synergy and cooperation between the two forces at the grassroots level, according to the ministry.

The seventh iteration was held in Pune in December 2019 at the Aundh Military Station's Foreign Training Node. A unit from the Indian Army's Kumaon Regiment and Sri Lanka's Gemunu Watch infantry regiment took part in that edition. According to the news agency PTI, the contingents got training in perception management and information warfare, human rights and humanitarian law, and counter-insurgency and counter-terrorism (CI-CT) operations in urban and rural contexts.