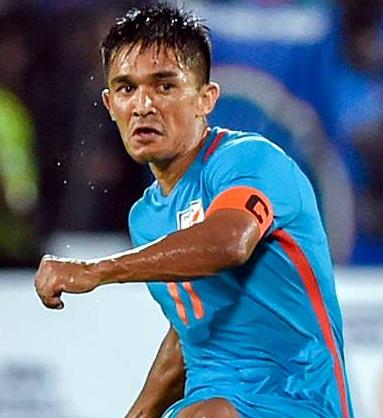 Sunil Chhetri is an Indian professional footballer who plays as a striker for Indian club Bengaluru FC and as the current captain of Indian national football team.

Sunil Chhetri popularly known as "Captain Fantastic" is both the most-capped player and all-time top goalscorer for Indian national team, with 64 goals in 101 appearances.

Sunil Chhetri was born on 3rd August 1984 to K.B. Chhetri, an officer in the Electronics and Mechanical Engineers Corps of the Indian Army, and Sushila Chhetri in Secunderabad, Andhra Pradesh, India. He got married to longtime girlfriend Sonam Bhattacharya in 2017.

Sunil Chhetri started his professional career at Mohun Bagan team in 2002. He then moved to JCT where he scored 21 goals in 48 games.

Sunil Chhetri started playing for National team ‘India Under-20’ in 2004. He kicked off his career in Indian Senior International Football Team in the year 2005. He also plays for club ‘Bangalore’.

Sunil Chhetri in his ongoing received many honors & awards, He received Arjuna Award in 2011 for his unpredictable contribution to sports from Govt of India.