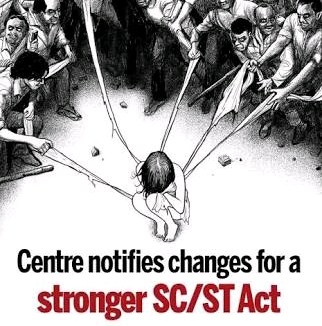 Supreme Court has accepted to review its petition of order of banning automatic arrest and registration of cases for alleged harassment of SCs and STs under the SC/ST act. The petition was filed by the Ministry for Social Justice and Empowerment.

The SC/ST Prevention of Atrocities Act, 1989 was amended recently to include new offences and to ensure speedy justice to victims. The amended law had come into effect from January 26, 2016.

Earlier, in an attempt to check misuse of SC & ST Act and protect honest public servants Supreme Court gave following verdict that an arrest is not mandatory under the SC/ST Act, and the automatic arrest has been scrapped.

Supreme Court further directed that public servants can only be arrested with the written permission of their appointing authority. This was to protect public servants and private employees from arbitrary arrests under the Atrocities Act.

Supreme Court also ruled that before arresting a public servant under the Act, a preliminary investigation by an officer not below the rank of deputy superintendent is a must.

Scheduled Castes and the Scheduled Tribes (Prevention of Atrocities) Act was ruled in the year 1989.  It is a comprehensive law which not only defines atrocities against SCs and STs, but also to make several rules, regulations etc. for proper protection of these vulnerable classes.

SC/ST law also states that public servant (non-SC/ST) neglecting his duties related to SCs/STs will be punished with imprisonment for a term of 6 months to 1 year. Ministry of Social Justice is the nodal ministry to enforce the SC & ST (Prevention of Atrocities) Act.