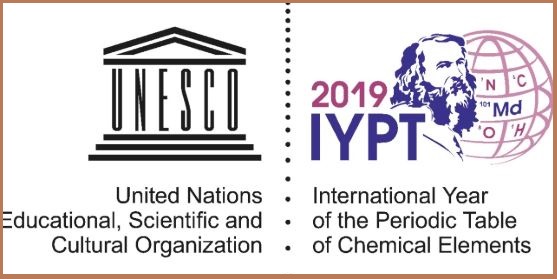 UNESCO has declared 2019 as the International Year of the Period Table of Chemical Elements (IYPT) to commemorate the 150th birthday of the periodic table of chemical elements.

The Periodic table of the Chemical elements was first published by Russian scientist Dmitry Mendeleev in the year 1869.

The Periodic Table of Chemical Elements is the tabular arrangement of the chemical elements, arranged by atomic number, electron configuration, and recurring chemical properties. The important features of the periodic table are:

The seven rows of the table are called as periods and generally accommodate metals on the left and non-metals on the right.

The columns of the table are called groups and contain elements with similar chemical behaviors.

The elements from atomic numbers 1 (hydrogen) to 118 (oganesson) have been discovered in nature or synthesized in laboratories.

The first 98 elements listed in the periodic table occur naturally, though some are found only in trace amounts and a few were discovered in nature only after having first been synthesized.

Elements from 99 to 118 have only been synthesized in laboratories or nuclear reactors.

Efforts are on to elements having higher atomic numbers these elements would begin the eighth row, and theoretical work has been done to