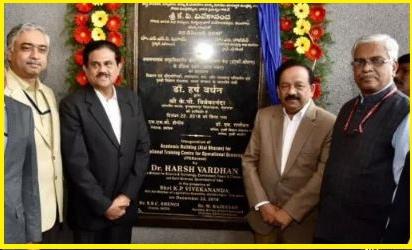 Harsh Vardhan dedicated the ITCOocean to the Former Prime Minister Shri Atal Bihari Vajpayee and named the academic building as Atal Bhavan and the Guest House as Atal Atithi Griha.

This UNESCO category 2 center was established by the Ministry of Earth Sciences (MoES), Govt. of India earlier in 2013 but it upgraded to assist UNESCO and its Intergovernmental Oceanographic Commission (IOC).

It will help in providing capacity building and training activities in operational oceanography.

It will thus benefit the South Asian and African states bordering the Indian Ocean and the small island nations in the Pacific from INCOIS’ ocean science and management practices.

The General Conference of UNESCO approved the offer of Government of India to establish ITCOocean as a UNESCO Category 2 Centre in November 2017.

» Fourth edition of Kochi-Muziris Biennale being held in Kochi, Kerala