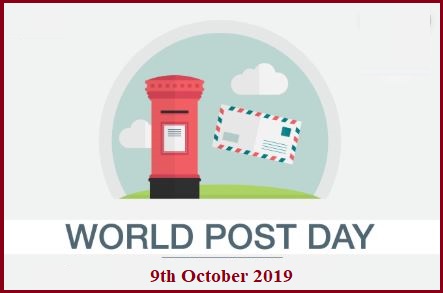 World Post Day is celebrated every year on 9th October around the world to promote awareness of the postal services and its contribution in communicating.

World Post Day aims to create awareness of the role of the postal section in day to day lives of people and also its contribution to the social and economic development of the nation.

World Post Day date (9th October) is celebrated in remembrance of the establishment of Universal Postal Union (UPU) in 1874 in Bern, Switzerland. It was declared as the World Post Day by the UPU Congress held in Tokyo, Japan, in 1969.

Note: In India, National Post Day is also celebrated on 10th October every year to mark the importance of Indian Postal Service and Indian Post.

Universal Postal Union (UPU) is a specialized agency of the United Nations that coordinates postal policies among member nations, in addition to the worldwide postal system.

UPU was established in 1874 and is the second oldest international organization worldwide after the International Telecommunication Union (ITU).

UPU is headquartered in Berne, Switzerland.