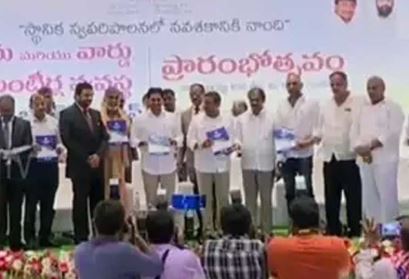 Village Volunteers System scheme is aimed at providing governance services at doorsteps of people. The basic idea behind implementing the scheme is to infuse confidence among people in government and to see that their basic needs are met at their door-steps.

Village Volunteers System scheme will be able to reach the poorest of the poor and make all villages self-sufficient.

Village Volunteers System scheme will involve more than 2.8 lakh volunteers. Under it, 1 volunteer will cover 50 families in each village. Identity cards will be given to each volunteer and they would get an allowance of Rs.5000 per month.

Toll-free telephone number '1902' would be set up a call center in Chief Minister Office (CMO) to receive grievances of people.

Volunteers will 1st identify beneficiaries, get to know their problems, and then describe and outline schemes being provided by the government for them.