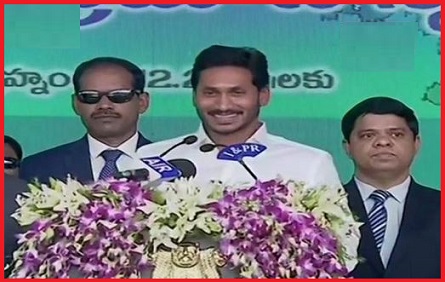 At present, YS Jaganmohan Reddy is the 17th Chief Minister of Andhra Pradesh. He took oath on 30th May 2019.

YS Jaganmohan Reddy was born 21 December 1972 (46-years-old) in Pulivendula village of Kadapa District, Andhra Pradesh. He has a political background. He is a son of former Chief Minister of Andhra Pradesh, Y. S. Rajasekhara Reddy.

YS Jaganmohan Reddy has done his Schooling at Hyderabad Public School. He has completed his Graduation from Nizam College. He holds the degree of B.com And Masters Of Business Administration (M.B.A).

YS Jaganmohan Reddy got married to Bharati on 28 Aug 1996. She is the daughter of Dr. E.C Gangi Reddy, a local pediatrician, and philanthropist from Pulivendula. The couple has two daughters.

YS Jaganmohan started his political career campaigning for Indian National Congress (INC) during the 2004 elections in Kadapa District. In 2009, Jaganmohan was elected as Member of Parliament from Kadapa constituency

In 2019 elections, YS Jaganmohan led his party to an astounding victory by bagging 151 of the 175 seats in the Assembly and took oath on 30th May 2019 as the 17th Chief Minister of Andhra Pradesh.