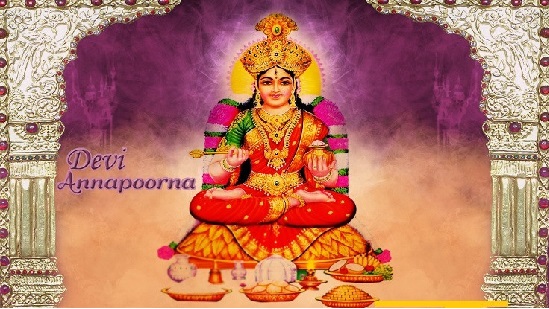 Hindu Religion: Annapurna Jayanti the full moon of the month

According to the 'Annapurna Jayanti' Hindu Calendar, the full moon of the month Margashirsha is celebrated. This is Mother Annapurna's birthday.

Annapurna Jayanti is one of the prominent major festivals in Indian culture. This is a special significance of the Hindu religion.

It is believed that once in ancient times, when the food was reduced to earth, then Mother Parvati had to be rescued in the form of 'Mother Annapurna' as the Mother of food, by providing food to the earth masses and protecting all mankind.

The day Mata Annapurna was born, it was the full moon of the month of Margashirsha. For this reason, 'Annapurna Jayanti' is celebrated on the day of Margashirsh Purnima.

Mother Annapurna is the goddess of food. It is believed that there is no shortage of money in the house by worshiping kitchen, stove, gas etc. on this day and the grace of Annapurna Devi remains unchanged. On the anniversary of Annapurna Jayanti, 'Annapurna' form of Mother Parvati is worshiped.

This day has a special significance for doing charity.

Annapurna Jayanti gives knowledge of the importance of food. This message gives us that we should never disrespect food or waste it.

On this day people donate food. Bhandara is also organized in place of Annapurna Jayanti.

The birthday of Lord Ganesha and celebrations   G...

Famous temples in India which have been built thousands of y...