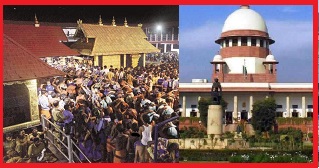 The Supreme Court of India on 28th September 2018 ruled a verdict that allowed the entry of women into the Sabarimala Ayyappa temple in Kerala.

The Supreme Court ruled that women, irrespective of their age, have the right to enter the temple. The CJI Dipak Misra held that biological or physiological reasons cannot be accepted in freedom for faith.

The Supreme Court five-judge bench comprising of CJI Justice Dipak Misra and Justices Rohinton Nariman, AM Khanwilkar, DY Chandrachud, and Indu Malhotra struck down Rule 3(b) of the Kerala Hindu Places of Public Worship (Authorisation of Entry) Rules, 1965 by a 4:1 majority.

The Supreme Court judgment was on the basis of Rule 3(b) that the entry of women aged between 10 and 50 years was barred in the Sabarimala temple.

Sabarimala is a Hindu pilgrimage center located at the Periyar Tiger Reserve in the Western Ghat mountain ranges of Pathanamthitta District, Perunad grama panchayat in the state of Kerala.

The shrine at Sabarimala is an ancient temple of Ayyappan also known as sasta and Dharmasasta. In the 12th century, Manikandan, a prince of Pandalam dynasty, meditated at Sabarimala temple and became one with the divine. Manikandan was an avatar of Ayyappan.

» SC Verdict: List of services where Aadhaar 'is' & 'not' mandatory