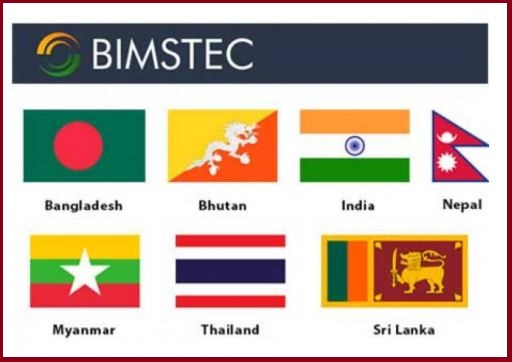 The Bay of Bengal initiative for multi-sectoral technical and economic cooperation (BIMSTEC) is a regional group of seven countries in South Asia and South East Asia lying in the littoral and adjacent areas of Bay of Bengal constituting contiguous regional unity.

BIMSTEC was established on 6 June 1997 through the Bangkok Declaration. It is headquartered in Dhaka, Bangladesh.

All the member countries are collectively home to around 1.5 billion people which constitute around 22% of the global population.

BIMSTEC’s main objective is to promote technological and economic cooperation among South Asian and south-east Asian countries along the coast of the Bay of Bengal.

BIMSTEC grouping is a sector-driven cooperative organization, started in 2006 with six sectors including trade, technology, energy, transport, tourism, and fisheries.

International Buddhist Conclave event will be hosted by India in 2020

BIMSTEC meeting in Nepal to sought the conclusion for speedy...

About Bay of Bengal Initiative for Multi-Sectoral Technical ...

» International Buddhist Conclave event will be hosted by India in 2020