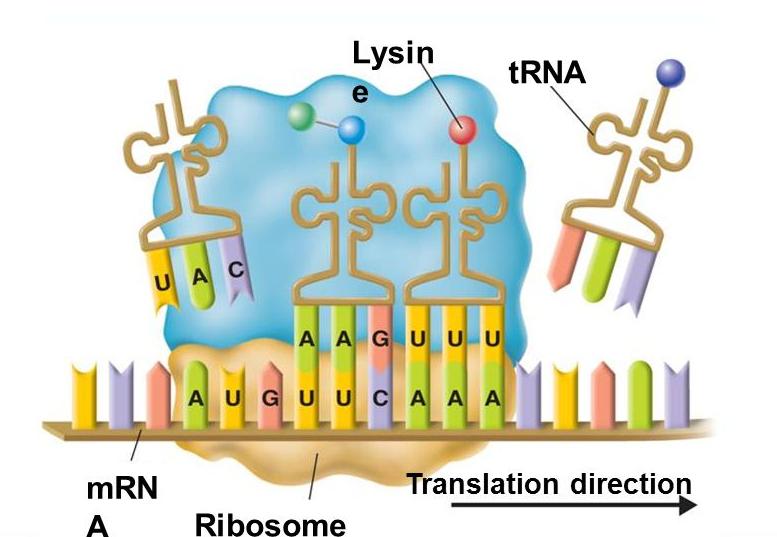 Translation is the process by which a protein is synthesized from the information contained in a molecule of messenger RNA (mRNA).

A mRNA sequence is read using the genetic code, which is a set of rules that define how a mRNA sequence is to be translated into the 20-letter code of amino acids, which are the building blocks of proteins.

The genetic code is a set of three-letter combinations of nucleotides called codons, each of which corresponds with a specific amino acid or stop signal. Translation occurs in a structure called the ribosome, which is a factory for the synthesis of proteins.

The ribosome has a small and a large subunit and is a complex molecule composed of several ribosomal RNA molecules and a number of proteins.

The start codon in all mRNA molecules has the sequence AUG and codes for methionine. Next, the large ribosomal subunit binds to form the complete initiation complex.

During the elongation stage, the ribosome proceeds to translate each codon in turn. Each corresponding amino acid is added to the growing chain and linked via a bond called a peptide bond.

Lastly, termination occurs when the ribosome reaches a stop codon (UAA, UAG, and UGA). Since there are no tRNA molecules that can recognize these codons, the ribosome recognizes that translation is complete. The new protein is then released, and the translation complex comes apart.