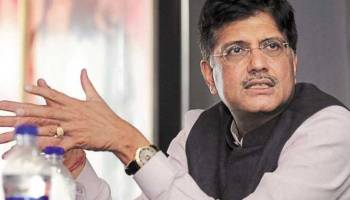 Minister of railway Piyush Goyal who is the son of Ved Prakash Goyal who had served as a union minister for shopping in the Atal Bihari Vajpayee cabinet.

Ved Prakash was also in Bhartiya Janta Party (BJP) for a long time and his mother Chandrakanta Goel was a tree time MLA from Maharastra.

Piyush Goyal was the minister of State with Independent Charge for power, Coal, New and Renewable Energy in the Government of India.

Piyush Goyal served on board of India’s largest commercial banks, the state bank of India and Bank of Baroda.

Goyal was a member of the standing committee on finance and the consultative committee for the ministry of defacing.

During 28 years long political career Goyal has served on the national executive and several important positions in the PJP.

He is also nominated by the government of India to the Task Force for Interlinking of Reserves.

In 1991 Piyush Goyal was the Dy. Campaign In-charge for the parliament election and played a key role at the central level in all election since 2004.

He was elected as the BJP candidate from Maharashtra for the Rajya Sabha on 3 June 2016.

Railways first set of solar plants with a total capacity of ...

India Railways would be working with the Indian Space Resear...

Ministry of Railways annoucement for railways safety on 28th September 2017

The Union Minister of State for Coal, Power and Minster, MR....

» Ministry of Railways annoucement for railways safety on 28th September 2017