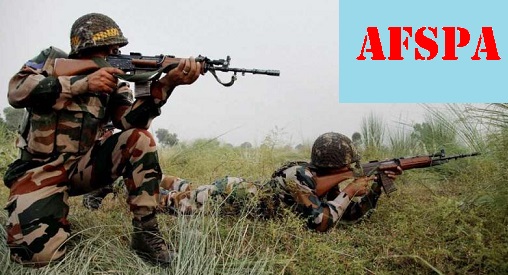 Armed Forces (Special Powers) Act 1958 'AFSPA' was enacted in 1958 to bring ‘disturbed’ areas declared under it under control.

AFSPA empowers both state and central government to declare areas as ‘disturbed’ due to differences or disputes between members of different religious, racial, language or regional groups or castes or communities.

Declaration of Disturbed area: The section (3) of the Act empowers governor of State/UT to issue an official notification in Gazette of India, following which Centre has authority to send in armed forces for civilian aid. Once declared ‘disturbed’, the region has to maintain a status quo for a minimum of three months.

Special powers to armed forces: The AFSPA Act gives special powers to army and state and central police forces to shoot to kill, search houses and destroy any property used by insurgents in disturbed areas without a warrant and provide cover to forces from prosecution and legal suits, all in the name of aiding civil power. It also provides army personnel with safeguards against malicious, vindictive and frivolous prosecution.

Even an officer, who is not on duty, is granted the right to shoot to kill, just on the basis of mere suspicion to ‘maintain the public order’.