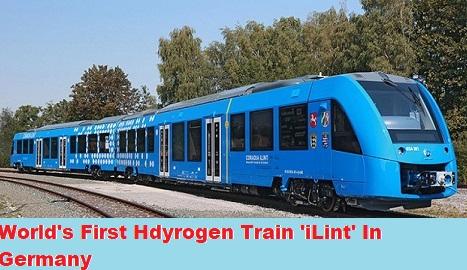 The 'iLint' train technology provides a greener and quieter alternative to diesel on non-electrified railway lines.

The 'iLint' hydrogen trains are manufactured by French TGV-maker Alstom and are commercially running on a 100km route between towns and cities of Cuxhaven, Bremerhaven, Bremervoerde, and Buxtehude in northern Germany.

Hydrogen trains are equipped with fuel cells that produce electricity by combining hydrogen with oxygen. This conversion process only emits steam and water, thus producing zero emissions. Excess energy produced is stored in ion-lithium batteries on board train.

Hydrogen trains also make very little noise. Moreover, hydrogen fuel cells have advantages over batteries. Instead of recharging, they can easily be refueled like gas or diesel engine. It is also easier to build refueling infrastructure for these trains at railway stations.

Hydrogen trains can run for around 1,000 km on a single tank of hydrogen, similar to the range of diesel trains.

Hydrogen train gives an attractive prospect to many cities scrambling to combat air pollution. The only disadvantage these hydrogen trains is that they are more expensive than fossil fuel-based trains.

» The Marxist approach of the historical study and Karl Marx