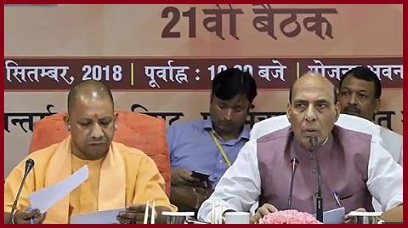 Home Minister Rajnath Singh has chaired 21st edition of meeting of the Central Zonal Council on 24th September 2018 in Lucknow.

Chief minister Yogi Adityanath was vice chairman of the council and the host.

The meeting comprised of the states of Uttar Pradesh, Madhya Pradesh, Chhattisgarh, and Uttarakhand.

It addressed the common concerns of the participating states and settled cross-border concerns.

Some of these issues are Issue of distribution of assets between Uttar Pradesh and Uttarakhand & Issues related to Dams, Flow of Rivers and compensation for certain projects.

The previous meeting of the council was held in January 2015.

Under the State Reorganization Act, 1956, 5 Zonal Councils — central, western, northern, southern and eastern — have been established.