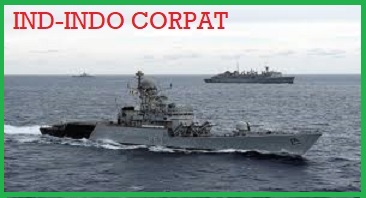 The 32nd edition of India-Indonesia coordinated patrol (IND-INDO CORPAT) is being held in Belawan, Indonesia.

Under 'IND-INDO CORPAT 2018', ships and aircraft from both countries will undertake patrolling on respective sides of 236 nautical miles long International Maritime Boundary Line.

The IND-INDO CORPAT 2018 patrolling will be conducted in three phases, followed by a closing ceremony at Port Blair, Andaman, and Nicobar Island.

The INS Kulish, deployment is believed to contribute towards the Indian Navy’s effort to forge strong bonds of friendship across seas and consolidate inter-operability.

The IND-INDO CORPAT 2018 patrolling aims to emphasize India’s peaceful presence and solidarity with friendly countries towards ensuring good order in the maritime domain, consolidate interoperability and strengthen existing bonds of friendship between the two countries.

Under the strategic partnership between India and Indonesia, navies of both countries have been carrying out coordinated patrolling twice a year since 2002 near International Maritime Boundary Line in an effort to keep Indian Ocean region (IOR) safe and secure for commercial shipping and international trade.

Organized patrol between India and Indonesia and Indian Navy...

Union Cabinet approves MoU between India and Indonesia on He...