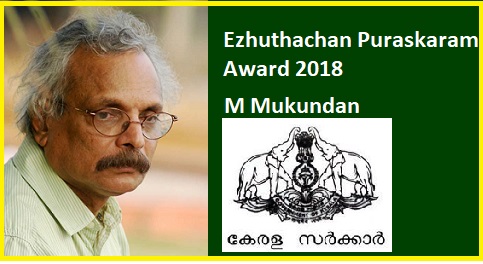 Acclaimed Malayalam writer M. Mukundan (Maniyambath Mukundan) has been selected for the Ezhuthachan Puraskaram-2018 award, the highest literacy prize of the Kerala government.

M. Mukundan (76 years old) will be conferred for his overall contributions to the language and literature.

The Ezhuthachan Puraskaram Award carries a monetary prize of Rs 5 lakhs and citation.

M. Mukundan is popularly known as the writer of Mayyazhi and has been a recipient of the Chevalier of Arts and Literature by the French Government in 1998.