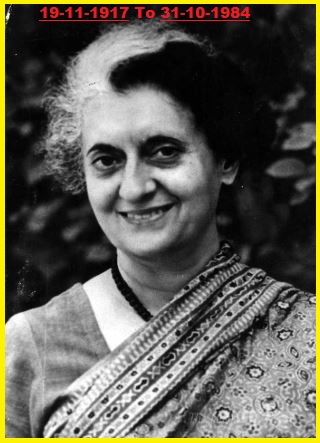 Indira Gandhi was born at 19th November 1917 in Allahabad. She was the daughter of the first Indian Prime Minister Pandit Jawaharlal Nehru and mother Kamla Nehru. She was assassinated at shootout on 31st October 1984 at her residence by her own security guards.

Indira Gandhi did her Metric from Pune University and went to Shantiniketan in West Bengal. She later went on to study in Switzerland and Oxford University in London.

Indira Gandhi played a major role in strengthening the Indian democratic structure and tradition. She handled the war of 1971 against Pakistan and won it. The signing of the Shimla Pact with Pakistani Premier Z.A. Bhutto, Indo-Soviet Treaty of Peace, Friendship and Cooperation was done under her leadership.

Under her leadership the first nuclear tests at Pokhran took place. First Asian Games in the New Delhi, first Astronaut Squadron Leader, Rakesh Sharma had gone to the Space and the growth of the Indian Space Research and Peaceful Nuclear development gone under her proficient guidance.

Indira Gandhi was granted with the great Indian award, Bharat Ratna in 1971.