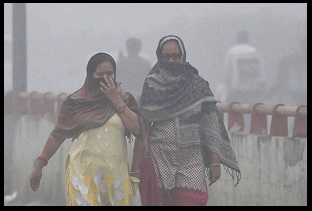 According to a recent study conducted by researchers from the University of Chicago (United States) in the last 20 years, Delhi has been 10 times more polluted which is reducing the life expectancy of its citizen by 10 years.

AQLI is an index in which the effect of air pollution on life has been assessed. Air pollution has attracted attention in Delhi in the year 2016 when an average of 113 microgram antibiotic meter pollution was detected here.

As per the study, If the quality of clean air is determined by the World Health Organization (WHO), if Delhi gets air on that basis, people living here will be able to live 10 more.

The AQLI reveals that India and China, which make up 36 percent of the world's population, account for 73 percent of all years of life lost due to particulate pollution.