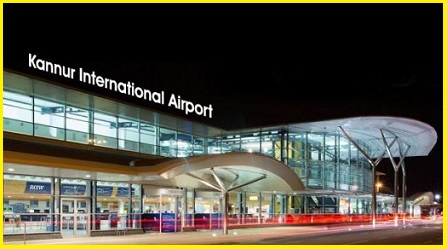 Kerala is India's first state to have 4 international airports after the inauguration of Airport at Kannur: Details, Features, Highlights

Kerala has become the first state in India to have four international airports with the inauguration of Kannur airport. It was inaugurated jointly by Union Civil Aviation Minister Suresh Prabhu and Kerala Chief minister Pinarayi Vijayan by lighting the lamp inside the terminal building.

It will give a major boost to trade, commerce, tourism, employment and export prospects in the Kerala state.

The first commercial flight from this airport Air India Express flight IX 715 with 180 passengers on board to Abu Dhabi was flagged off recently on 9th December 2018.

Kannur international airport is built on a public-private partnership (PPP) model. It is spread across 2,000 acres of area It will help non-resident Keralites (NRKs), especially in the Gulf region, besides boosting tourism and exports, which will result in several job opportunities.

Kannur international airport commissioning is believed to pave way for state’s overall development and prosperity, especially northern region. It will boost tourism in the region like Wayanad, Kannur, and Kasargode. It may also increase inter-trade in sectors such as spices and handloom.