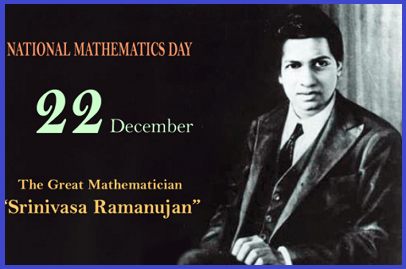 The National Mathematics Day is a national observance in India, celebrated every year on 22nd December across India. It is celebrated to commemorate the birth anniversary of famous Indian Mathematician Srinivasa Ramanujan.

The National Mathematics Day-2018, it marks Srinivas Ramanujan 131st birth anniversary celebrations. The day aims to honors his contribution to the field of Mathematics and also to keep his legacy alive to inspire the future mathematicians.

Srinivasa Ramanujan was born in the year 1887 and lived during the British rule in India. His life was totally devoted to Mathematics. At a young age of 11 years,

Srinivasa Ramanujan started showing signs of a genius. He had attained expertise in trigonometry and developed many theorems by himself. He got his papers published in the Journal of the Indian Mathematical Society in the year 1911.

Srinivasa Ramanujan compiled nearly 3,900 results, mostly identities, and equations, on his own without any assistance. Many of the results were completely original and novel such as the Ramanujan prime, the Ramanujan theta function, partition formulae, and mock theta functions. These results and identities have opened entirely new fields of work and inspired further research.

Srinivasa Ramanujan came out with his own theory of divergent series. Also, he worked out the Riemann series, the elliptic integrals, hypergeometric series and the functional equations of the zeta function. The number 1729 is famously known as the Hardy-Ramanujan number.

Maksym Radziwill and Kaisa Matomaki for revolutionary work i...