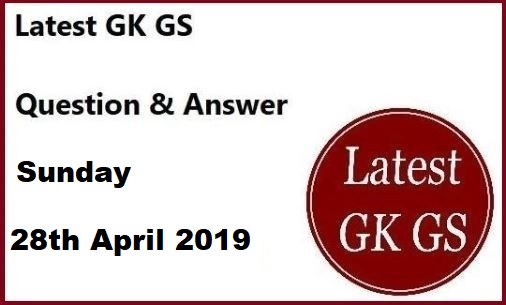 1. When is the World Day for Safety and Health at Work is celebrated every year?

2. How many medals did India win at Asian Boxing Championship?

3. Which terror outfit has claimed the responsibility of the devastating Easter bomb blasts in Sri Lanka?

4.  The voting for the third phase of Lok Sabha Elections 2019 was held for how many constituencies?

5. Which city is hosting the 23rd edition of the Asian Athletics Championship?

6.  When the International Dance Day is celebrated every year?

7. Which Indian players wins a silver medal each at Asian Wrestling Championship?

8. The United States imposed sanction on which country that may deny visas to them?

9. Which country has decided to end sanctions waivers for all importers of Iranian oil??

10.  What is the name of Real-Time Voice Banking Platform that FSS has launched?

11. BCCI has nominated which Indian cricketers for the Arjuna award 2019?
Ans:- Mohammad Shami, Jasprit Bumrah, Ravindra Jadeja and Poonam Yadav
12. When is the SBI new rules for customers & banking will come into effect?
Ans:- 1st May 2019

Latest World Day For Safety And Health At Work Updates

World Day for Safety and Health at Work Celebrations On 28th...