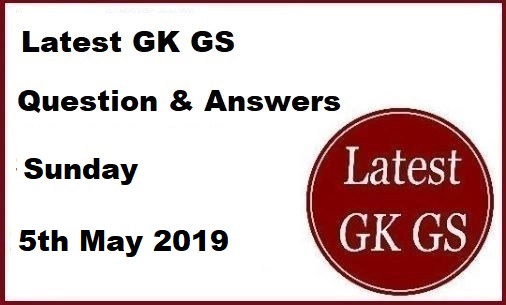 1. When was the  World Laughter Day celebrated in the year 2019?

2.  Recently India-Australia formed a Joint Working Group on which field?

3. Indian Navy's which Indian Naval Ship (INS) was decommissioned after 36 years of service on 6th May 2019?

4. Indian Navy to acquire which 10 helicopters from Russia?

Ans:-  Gujarat Shops and Establishments (Regulation of Employment and Conditions of Service) Act, 2019

6.  Who was officially crowned Rama X of Thailand?

7. Recently, Who was named India’s envoy to Senegal?

9. Which entities in India signed an agreement to seize evaders to decrease black money generation?

10. Which organization will send food to Cyclone Fani hit areas?

11.  Which country is hosting TePe Sigeman & Co International Chess tournament-2019?
Ans:- Sweden
12. What is the name of Former Chief Justice of Madras and Kerala High Court who died at the age of 76?
Ans:- Justice Subhashan Reddy
13. What is the title of the autobiography of Pakistani Cricketer Sahid Afridi?
Ans:- Game Changer