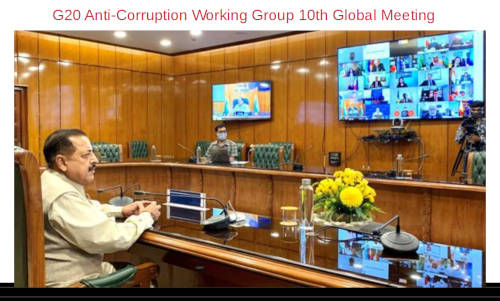 In the virtual meeting of the G20 Anti-Corruption Working Group India lauds the efforts to organize the event under the shadow of Corona, Dr. Jitendra Singh said that even the COVID cannot deter our fight and crusade to eradicate corruption.

Saudi Arabia is the president for organizing the G20 Ministerial Meeting in its 10th Anniversary year. Dr. Jitendra Singh wished that the world will come together for a steadfast and strong movement to combat the menace of corruption.

Speaking at the 1st ever Ministerial Meeting of G-20 Anti-Corruption Working Group, Union Minister of State (Independent Charge), Development of North Eastern Region (DoNER), MoS PMO, Personnel, Public Grievances, Pensions, Atomic Energy and Space, Dr. Jitendra Singh said that India under Prime Minister Shri Narendra Modi is committed to the policy of zero tolerance against corruption and unaccounted money. In pursuance of this fight against corruption, Dr. Jitendra Singh told about a range of initiatives that have been taken by the Modi government over the last 6 years.

As a groundbreaking step to fight against corruption Prime Minister Narendra Modi government amended India's Prevention of Corruption Act, 1988, after 30 years in 2018 to introduce a number of new provisions including criminalizing the act of giving bribe also in addition to taking a bribe and at the same time putting in place an effective deterrence for such actions by individuals as well as corporate entities.

» RTI: SBI facing thousands of fraud cases in the last 6 months in 2018