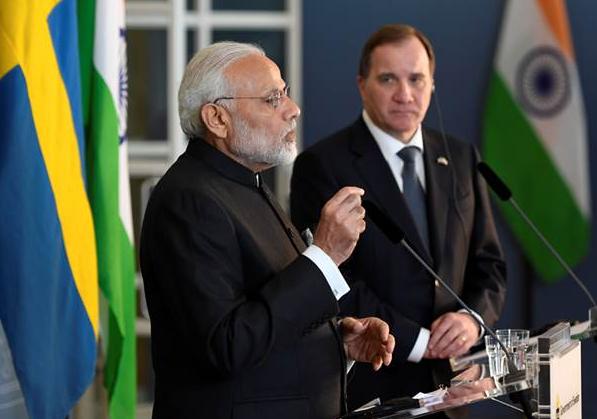 Prime Minister Narendra Modi is on a five-day visit to Sweden, United Kingdom & Germany. The visit to the three European nations aims at enhancing bilateral cooperation in key areas like trade, investments and Science & technology.

PM Narendra Modi on the first leg of his visit, reached Sweden where he attended the first-ever India-Nordic Summit at Stockholm, co-hosted by India and Sweden.

India-Nordic Summit in Stockholm was also attended by the Prime Ministers of Finland, Norway, Denmark and Iceland.

India on the occasion signed 6 Memorandums of Understanding (MOUs) and Agreement with Sweden, Denmark and Iceland on 17th April 2018 in India-Nordic Summit, Stockholm.

MOUs/Agreements between India and Sweden

MOUs/Agreements between India and Denmark

MOU on Cooperation in the field of Sustainable and Smart Urban Development between the Ministry for Housing and Urban Affairs of India and the Ministry of Industry, Business and Financial Affairs of Denmark

MOUs/Agreements between India and Iceland