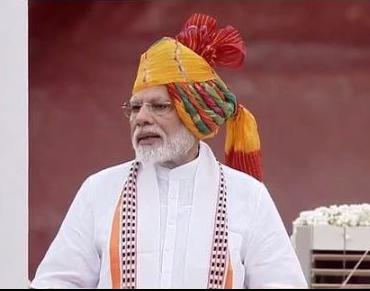 PM Narendra Modi received a Guard of Honour from a contingent of the Army, Navy, Air Force and Delhi Police.

One nation, one constitution spirit has become a reality after scrapping of provisions of Article 370.

There is a ‘huge’ scope for improvement in the tourism sector and everyone should visit at least 15 tourist destinations within India by 2022.

India can become a 5 trillion dollar economy in the next 5 years.

Jal Jeevan Mission to ensure safe drinking water to all households was announced. The government will spend Rs 3.5 lakh crore for it.

Government has an aim is to reach among the first 50 nations in ease of doing business.

Nation, One Mobility Card and India endorsed the idea of One Nation, One Election emphasizing the need for democratic discussions on the issue.

A transfer of about Rs. 90,000 crores to farmers’ bank accounts is in progress to those who are beneficiaries of PM Kisan Samman Nidhi Yojana.
1.5 lakh wellness centers will be created at villages.