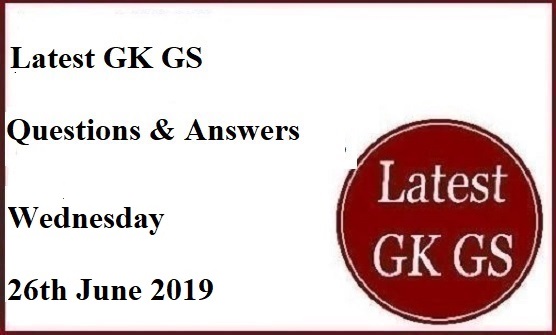 1. When is International Day Against Drug Abuse And Illicit Trafficking observed every year?

2. When is International Day in Support of Victims of Torture observed every year?

3. When was India celebrated the 36th winning anniversary of its first cricket world cup back in 1983?

4. When was the 44th anniversary of 1975 Emergency in India declared by Indira Gandhi observed?

6. what is the name of the Indo-French joint air exercise in which IAF participating starting from 1st July 2019?

7. What is the name of DRDO’s herbal drug developed recently for Leucoderma?

9. US President Donald Trump recently signed a strong banning order against which country?

10.  How much penalty has been proposed for not providing a way to emergency vehicles under the Motor Vehicle (Amendment) Bill approved by cabinet?

12. Which industry icon is set to retire as Executive Chairman of his company in July?

14. Who has won the prestigious RedInk Award for Excellence in Indian Journalism ‘Journalist of the Year’?

June 2019 was recorded as the hottest-ever month in Earth’s history: Report

June 2019 was recorded as the hottest-ever month in Earth&rs...