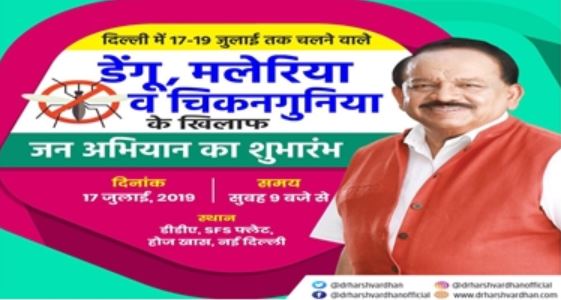 Jan Jagrukta Abhiyaan is a campaign aimed towards sensitizing and mobilizing the community for prevention and control of vector-borne diseases (VBDs) such as Dengue, Chikungunya, and Malaria.

Jan Jagrukta Abhiyaan was a Peoples Movement by the active involvement of people’s representatives, officers from Centre Government, Government of NCT Delhi, all 3 Delhi Municipal Corporations, NDMC, Railways and Cantonment board and other stakeholders to combat dengue, malaria, and chikungunya.

Jan Jagrukta Abhiyaan witnessed for the first time involvement of 3 governments agencies- national, state and local bodies have come together to create awareness amongst people for a public health activity.

As per data compiled by Health ministry shows that till 30 June 2019at least 8,058 positive dengue cases with 8 deaths, 14404 chikungunya cases have been reported from across country. Also, a total of 66,313 Malaria cases have also been reported across the country until 31 May 2019.

The 35th National Eye Donation for corneal diseases and tran...

MInistry of Health: NBCC buys out stake in HSCC

NBCC to buy out the governments stake in consultancy firm HS...

UNICEF: India to host global conference on maternal and infant health in Dec 2018

India will host a meeting of UNICEF's motherhood, neonatal a...

Ministry of Health with Tata Trust and Dell to work together...