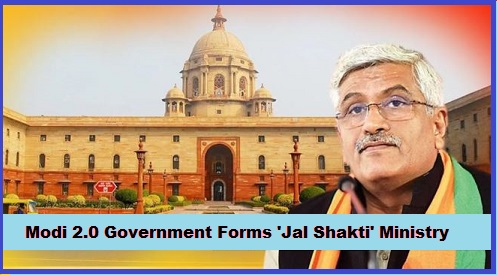 This formation of 'Jal Shakti' Ministry initiative is believed to bring all matters of water management and regulation under one department.

The ambit of the 'Jal Shakti' Ministry will encompass issues ranging from international and inter-states water disputes, the byzantine Namami Gange project, the flagship initiative to clean the Ganges, its tributaries and sub-tributaries and provide clean drinking water.

Earlier, Modi government during the year (2014-2019) has constituted 'Jal Ministry' the project to clean Ganga was moved from the Ministry of Environment and Forests (MoEF) to the Ministry of Water Resources.

Later, with a greater push and larger monetary allocation, the Namami Gange project was launched in June 2014.

Minister: The Jal ministry will be headed by Bharatiya Janata Party (BJP) MP Gajendra Singh Shekhawat while Ram Lal Kataria will be the minister of state.

As promised in BJP’s vision document in the run-up to the 2019 Lok Sabha elections, the ‘Nal se Jal’ scheme to provide piped drinking water to every household will be a component of government’s Jal Jivan Mission.

The ministry will roll out the government’s ambitious plans to provide piped water connections to every household in India by 2024.

It will also address international and inter-states water disputes and the Namami Gange project which is the flagship initiative to clean the River Ganga, its tributaries and sub-tributaries.

The Jal Ministry’s priority will be to provide clean drinking water to everyone.

» Study Report: Ganges River drying up in summers due to groundwater depletion: Details