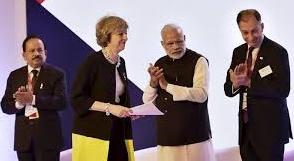 PM Narendra Modi on the second leg of his tour, reached London, UK where he attended the Commonwealth Heads of Government Meeting (CHOGM) and met Britain's Prime Minister, Theresa May on 18th April 2018.

PM Narendra Modi and Theresa May after bilateral talks signed 10 Memorandums of Understanding (MOUs) and Agreements on 19th April 2018 which are as follows:

India-UK has agreed to an overarching cyber-relationship framework that among others enables the development of a common and shared understanding of the international cyber activity.

A MoU on the rejuvenation of River Ganga, National Mission for Clean Ganga (NMCG) and the UK-based Natural Environmental Research Council (NERC).

A MoU on Skill Development, Vocational education and Training and seek to promote greater collaboration in areas such as strengthening skill delivery in high demand sectors where the UK has technical and skilling expertise.

A MoU on Exchange of Information for the Purposes of Combating International Criminality and Tackling Serious Organised Crime has been signed.

A MoU was signed on cooperation in the field of Animal Husbandry, Dairying and Fisheries Sectors seeking to strengthen collaboration in livestock health and husbandry, breeding, dairying, and fisheries.

A MoU was signed in the area of regulation of safe nuclear energy use for peaceful purposes.

A MoU between AIIA under the Ministry of Ayush in collaboration with the College of Medicine will set up a centre of excellence in Ayurveda and traditional Indian medicine in the UK.

An addendum covering research in humanities and social sciences has been added to the 2004 Newton-Bhabha MoU.

A Statement of Intent between NITI Aayog and UK’s Department of Business, Energy and Industrial Strategy (BEIS) has also been signed.

The UK has announced setting up a fast track mechanism to identify and resolve specific issues faced by Indian companies who are either in the UK or looking to establish operations in the UK.