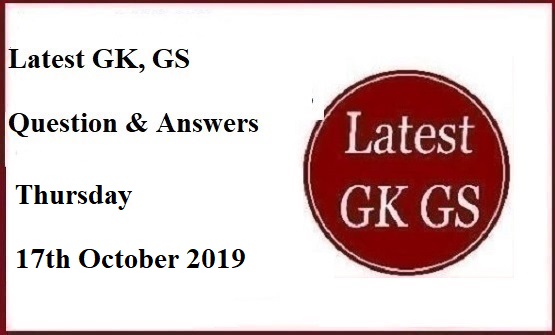 1. When is International Poverty Eradication Day is observed every year?

2.  According to the World Giving Index 2019, India was ranked at what place?

3. What is the name of the Indo-Japan Joint Air Force Exercise that starts from 17 Oct 2019?

4. According to the World Giving Hunger Index 2019, India was ranked at what place?

5. According to the IMF's World Economic Outlook 2019 Report: India’s growth rate was predicted to what percent?

6. Which scheme was recently launched by FSSAI on the occasion of World Food Day??

7. Who has been recently selected as president of the Indian Pharmaceutical Alliance?

8. India and which country is organizing a joint military exercise ‘Shinyuu Maitri’?

9. Who has been recently appointed as a new law secretary?

12. When International Rural Women Day is observed every year?