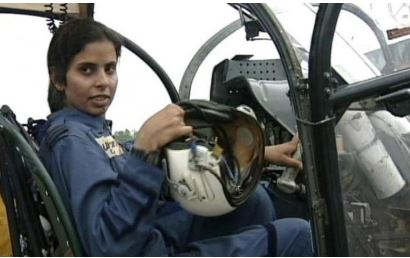 Gunjan Saxena entered the war zone of Kargil fought against Pakistan in the year 1999 along with her colleague lieutenant Srividya Rajan.

Gunjan Saxena was born and brought up in army family, and graduated from Hansraj College, the University of Delhi and joined Safdarjung Flying Club in Delhi to learn the flying basics.

Gunjan Saxena is married to an IAF officer who is also a pilot and the couple has a daughter.

Gunjan Saxena cleared SSB examination and got an opportunity to join the very first women batch of IAF trainee pilots of 25 women in the year 1994. She was first posted in Udhampur, Jammu and Kashmir (Himachal Pradesh).

Gunjan Saxena during Kargil's 'Operation Vijay' was involved in medical evacuation, surveillance of Pakistani positions in the war zone, and the provision of supplies to which she performed bravely.

Gunjan Saxena was awarded the prestigious Shaurya Award for his valor, courage, and patriotism by the Government of India.