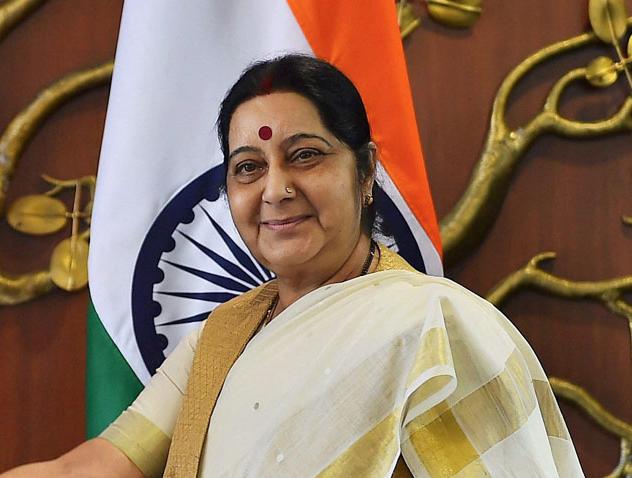 Sushma Swaraj is an Indian politician and member of the Bharatiya Janata Party. She is the present Union Minister for External Affairs in the government of India.

Sushma Swaraj was born on 14 February 1952 at Ambala Cantt, Haryana to Hardev Sharma and Shrimati Laxmi Devi. Her father was an eminent member of the Rashtriya Swayamsevak Sangh. She completed her graduation in B.A with Political Science and Sanskrit as major subjects from S.D. College of Ambala Cantonment.

She did a degree course in LL.B. from the Department of Laws of Punjab University at Chandigarh. In 1970 she received the Best Student award from S.D. College, Ambala Cantonment. She is also a keen reader of poetry and literature. Sushma Swaraj was declared the best cadet of N.C.C. of the S. D. College for three consecutive years.

She has won several awards of preponderance in speech contests, debates, performances, dramas, and other cultural activities. She was the President of Hindi Sahitya Sammelan of the State of Haryana for four years.

Sushma's move into politics in the 1970s with Akhil Bharatiya Vidyarathi Parishad (ABVP) aka All Indian Student Council, the right-wing student organization of the Rashtriya Swayamsevak Sangh (RSS) didn't come as a surprise since her father was a prominent RSS member.