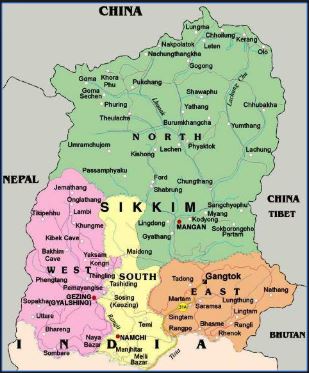 Sikkim is a state in northeastern India. It's capital name is Gangtok. It was commissioned to Indian Union on 16th May 1975.

Sikkim is the least populous and second smallest among the Indian states. It has 4 districts and divided into four parts North, South, East, West.

Sikkim borders Tibet in the north and northeast, Bhutan in the east, Nepal in the west, and West Bengal in the south. It is also located close to India's Siliguri Corridor near Bangladesh.

The strategic importance of Sikkim was realized in the 1960s during the 1962 Indo-China war and subsequent clashes at Nathu La and Chola in 1967. Sikkim is a strategic territory for both India and China.

Sikkim is the first state in India to make 100% Organic Farming.

» UIDAI Rules: How To Reactivate Your Deactivated Aadhaar Card