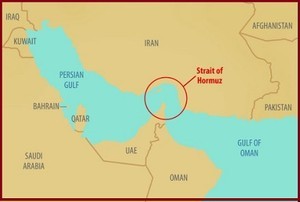 The Strait of Hormuz is located between Oman and Iran, connects the Persian Gulf with the Gulf of Oman and the Arabian Sea.

The Strait is also the route for nearly all the liquefied natural gas (LNG) from lead exporter Qatar.

On average, 14 crude oil tankers per day passed through the Strait in 2011, with a corresponding amount of empty tankers entering to pick up new cargos. More than 85% of these crude oil exports went to Asian markets, with Japan, India, South Korea, and China representing the largest destinations.

The United Nations' Convention on the Law of the Sea, signed in December 1982, defines "Territorial waters" to a maximum of 12 nautical miles beyond each country's coastline.

With incoming vessels forced to use the North and East routes to gain access to the Persian Gulf, they would be passing through Iranian waters, meaning the country could, in theory, make a case for restricting the traffic that enters.

However, Iran and the US might interpret the UN convention differently and, crucially, while Iran's government signed the 1982 agreement, their parliament never actually approved it.

In addition to these complications, by closing the waterway, Iran would not only be harming its export neighbors and the nations that import oil from the Gulf region: It would also cause considerable economic self-harm as the nation is also highly dependent on the Right of Free Passage through the Strait.

And while Iran's warning has unnerved some politicians, the Strait has been at the heart of regional tensions for decades, and this is not the first time that Tehran has made such threats.

» UIDAI Rules: How To Reactivate Your Deactivated Aadhaar Card