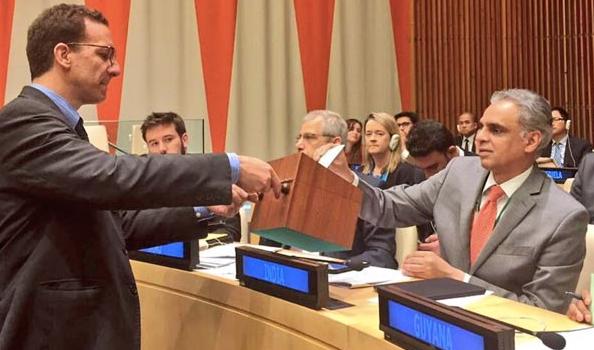 India has won the 6 elections polls conducted by UN’s Committee on Non-Governmental Organizations and Subsidiary bodies in the Asia Pacific States category on April 16, 2018.

India clinched the highest number of votes -46, followed by Pakistan 43, Bahrain 40 and China 39 while Iran, which received only 27 votes, lost the elections.

The UN’s Economic and Social Council (ECOSOC) elected India, Pakistan, China and Bahrain in the Asia Pacific States category and Brazil, Cuba, Mexico and Nicaragua in the Latin American and Caribbean States category.

India was also elected by acclamation to other subsidiary UN bodies in five separate polls including the Commission on Population and Development for a four-year term and the Commission on Crime Prevention and Criminal Justice for a three-year term.

India was elected by the Executive Board of the United Nations Development Programme (UNDP), United Nations Population Fund (UNFPA) and United Nations Office for Project Services (UNOPS) for three-year terms commencing from January 2019.

About UN’s Committee on Non-Governmental Organizations

It is a standing committee of the UN’s Economic and Social Council (ECOSOC). The council focuses on advancing the three dimensions of sustainable development- economic, social and environmental.