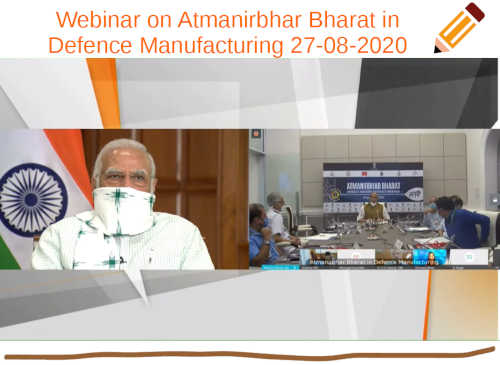 Prime Minister talked about the resources and potential in India to become Atmanirbhar in Defence Sector in coming years.

PM remarked decisions such as the appointment of CDS, which were pending for decades have been taken now, which reflects the confidence of New India.

According to PM Corporatization of Ordnance factories will strengthen both the workers and the Defence sector.

According to PM Modi, his government is working on the mantra of Reform, Perform, and Transform.

On the infrastructure initiatives, the Prime Minister spoke about two defense corridors underway in Uttar Pradesh and Tamil Nadu.

Prime Minister Narendra Modi concluded the webinar with a call for collective efforts to become self-reliant, (to become an Atmanirbhar Bharat).