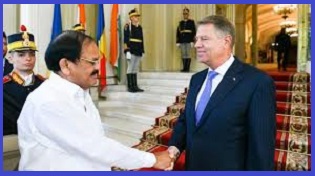 Indian Vice President Venkaiah Naidu visited Romania from September 18th September-20th September 2018 at the invitation of the Mr. Calin Popescu-Tariceanu, the President of the Senate of Romania.

VP Venkaiah Naidu held a meeting with the President of Romania, Mr. Klaus Iohannis followed by a high delegation level talks and discussions.

Romania’s support of India’s aspirations to become a Permanent Member of the UN Security Council.

Special interest in Space and Aerospace,

also signed Memorandum of Understandings (MoUs) on Cooperation on Tourism,

3 MOUs between Bucharest Chamber of Commerce each with CII, ASSOCHAM and PHDCCI.

In the field of tourism, the Union Cabinet has given its app...