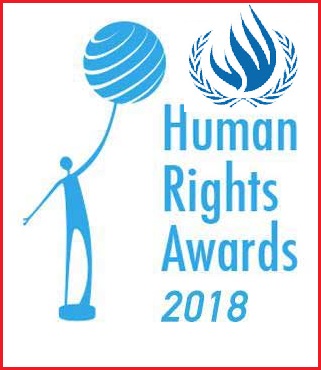 Winners of the UN Human Rights Prize 2018 are:

The United Nations Prize in the Field of Human Rights is an honorary award given for outstanding achievement in human rights.

The UN Human Rights Prize was instituted by the UN General Assembly (UNGA) in 1966 and was awarded for the first time on December 10, 1968, on the twentieth anniversary of the Universal Declaration of Human Rights.

The UN Human Rights Prize is an opportunity not only to give public recognition to the achievements of the recipients themselves, but also to send a clear message to human rights defenders the world over that the international community is grateful for, and supports, their tireless efforts to promote all human rights for all.

» Ministry of Culture: List of winners of Tagore Award for Cultural Harmony