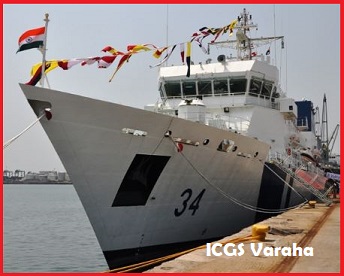 In March 2015, Union Defence Ministry had awarded a contract to L&T for construction of seven OPVs awarded. The first and second ships of this project already have been delivered to ICG and are presently based in the Western Coast and Eastern Coast of India and third OPV will be delivered in early 2019. The shipyard will deliver all seven ships by March 2021.

ICGS Varaha is fourth in the series of 98 M OPVs designed and built indigenously by Larsen & Toubro (L&T).

ICGS Varaha is fitted with advanced technology navigation and communication equipment, sensor and machinery. Its weaponry includes one 30 mm and two 12.7 mm guns with fire control system. It has been designed to attain a maximum speed of 26 knots and has the endurance of 5,000 nautical miles.

ICGS Varaha can carry one twin-engine helicopter and four high-speed boats, including two inflatable boats, for boarding operation, search and rescue, law enforcement and maritime patrol. It will also be capable of carrying pollution response equipment to contain oil spill at sea.