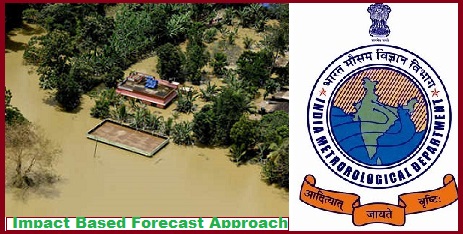 India Meteorological Department (IMD) has developed a new technology called ‘Impact Based Forecasting Approach’ to assess the rise of water level in rivers and reservoirs by rain.

It shows pre-event scenario will help state governments authorities to minutely monitor the impact of rainfall and take real-time decisions.

It will help to avoid the disastrous situation similar to Kerala floods. It can generate scenario to help make decisions to release water or not from reservoirs after a heavy downpour. It will be helpful for every state authority to take the decision. This system can be run in the pre-event scenarios.

The heavy downpour which had ravaged Kerala in August 2018 had caused the death of around 500 people and economic damages worth over Rs 40,000 crore. Excessive rainfall had led to floods in Kerala and was the result of climate change.

Kerala Government had blamed IMD for lapses in its part for wrong rain forecast. IMD had forecasted estimated 98.5 mm rain in the state between 9 and 15 August 2018 but Kerala received was 352.2 mm of rainfall resulting in severe flooding.

IMD is a national meteorological service of the country and chief government agency dealing in everything related to meteorology, seismology and associated subjects.  It functions under the Ministry of Earth Sciences.