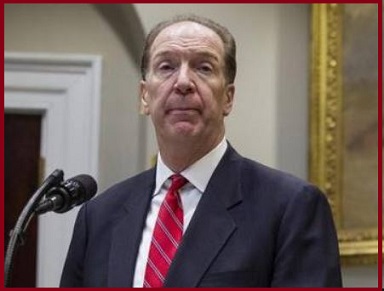 United States Treasury officer David Malpass was on 6th April 2019 has been elected as the new President of the World Bank.

The selection was made by the World Bank's board of directors after an open and transparent nomination process in which citizens of all member countries were potentially eligible.

David Malpass (63-years-old) is an American government official and economic analyst who currently serves as Under Secretary of the Treasury for International Affairs.

During the 2016 US presidential election, David Malpass also served as an economic advisor to Donald Trump, and in 2017, he was nominated and confirmed as the undersecretary for international affairs in the United States Department of the Treasury.

David Malpass was recognized for his forecasts before the financial crisis of 2007–2008 and in the time period following the Great Recession.

In February 2019, US President Donald Trump announced David Malpass as the nominee for President of the World Bank.