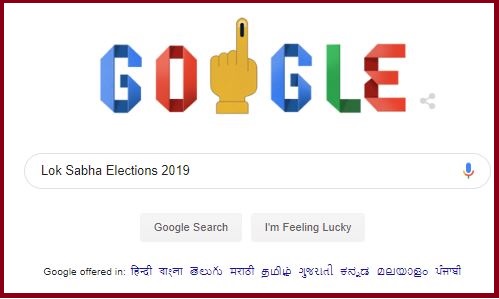 Search engine giant Google on 11th March 2019 is marking the beginning of the world's largest India's Lok Sabha Election-2019 with a colorful doodle.

Today Google with a colorful doodle is educating Indian citizen to must use their voting power. It is also informing candidates how to vote, what is the eligibility criteria and what is the significance of voting.

All parliamentary constituencies of Andhra Pradesh, Arunachal Pradesh, Meghalaya, Mizoram, Nagaland, Sikkim, Andaman and Nicobar and Lakshadweep, Telangana and Uttarakhand will go to polls in this phase. Besides, Assam, Bihar, Chhattisgarh, Jammu and Kashmir, Maharashtra, Manipur, Odisha, Tripura, Uttar Pradesh, and West Bengal will also vote in this phase.