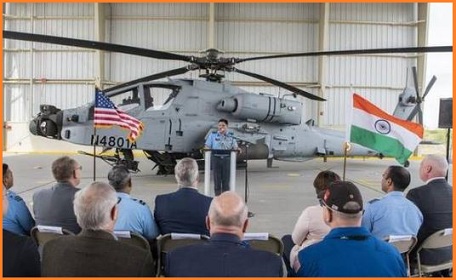 The Indian Air Force (IAF) on 11th May 2019, gets its first Apache Guardian attack helicopter at a production facility of Boeing Mesa, Arizona, USA.

The AH-64E (I) Apache Guardian is an advanced all-weather attack helicopter that can engage both air and ground targets with relative stealth using low-altitude obstacles like trees and hills as cover.

The AH-64E (I) Apache Guardian helicopters will provide a significant edge in any future joint operations in support of land forces.  The new acquisition is an important step towards modernization of the IAF's helicopter fleet.

The AH-64E (I) Apache Guardian helicopters have been customized to suit IAF’s future requirements and carry out precision attacks.

The Indian Air Force had signed a contract with the US government and Boeing in September 2015 for 22 Apache helicopters.

The first batch of these helicopters is scheduled to be shipped to India by July. 2019.