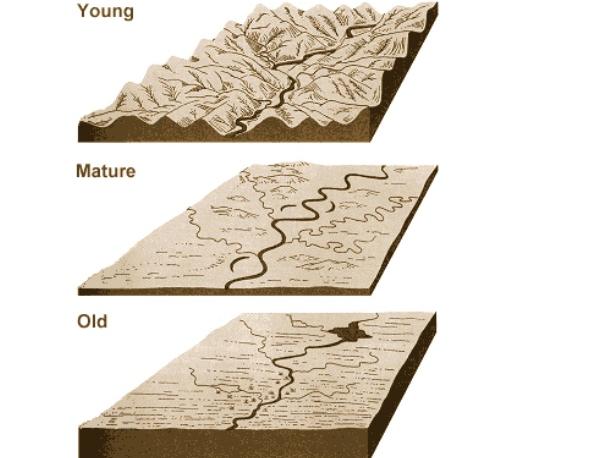 The term STRUCTURE here is not applied in the narrow sense but it includes all those ways in which the landforms are carved. It includes folds, Faults, bedding plane, mineral assemblage, the permeability of rocks, rock striations, hardness, the massiveness of rocks etc

a) Composition and Structure of rocks
The mineral composition, joint patterns, layering system, faulting etc, largely affect the nature and intensity of weathering. For example, the Karst topography is mainly found in the areas of Carbonate Rocks.

b) Structure of rocks contributes to climatic and floral factors of erosion
Rocks having cracks and fractures are easily susceptible to climatic weathering because alternate freeze and thaw of water accumulated in these cracks weaken them. The penetration of roots of certain plants through these fractures also weakens the rocks and are dislodged under the force of gravity.

In the youthful stage and mature stage of the cycle of erosion, structure and relief feature play the most dominant role. The processes like stream lengthening, drilling, Valley deepening etc take place in these two phases. The steep channel gradient which is a structural attribute increases the velocity and kinetic energy of the river flow and thus increases the erosional capacity of the river.

The rivers and streams discover and explore belts of structural weakness due to softer strata, faults, joints etc. For example, the old folded mountains of Chota Nagpur plateau have trellis pattern, The indie-Gangetic plain has a dendritic pattern because of HORIZONTALLY BEDDED sedimentary rocks. The drainage pattern of Narmada and Tapti are also controlled by the geological structure in the region.

e) Other landforms formed majorly due to Structural factors
Waterfalls are caused because of sudden descend or abrupt break in the course of a river. It is mainly caused due to variations in the relative resistance of rocks, the relative difference in topographic reliefs, vaulting etc. Victoria Falls on the Zambezi river is an example. Other landforms like the Structural Benches are also formed -due to differential erosion of alternate bands of hard and soft rocks.'

» Land-forms: The geographical cycle model or cycle of erosion