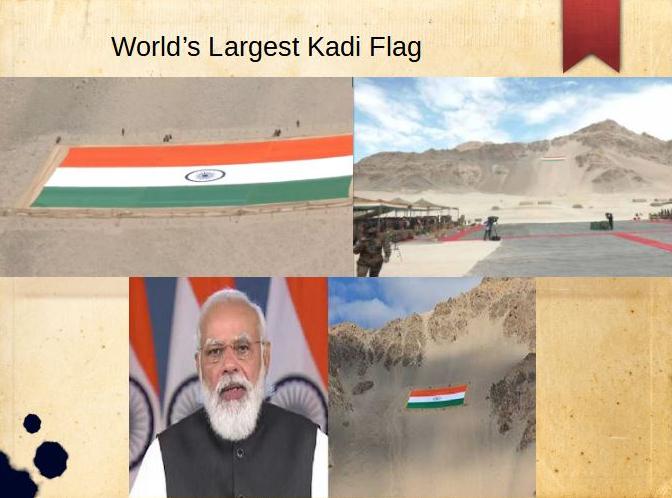 Gandhi Jayanti is remembered in whole India and hence in the Union Territory of Ladakh. On this auspicious occasion of Gandhi Jayanti, a huge Indian National Flag was unfurled in Leh, the capital of Ladakh. The special feature of this flag is that it is the largest Khadi national flag in the world. The flag is 225×150 feet long and constructed entirely of Khadi. Not only that, but it weighs close to a ton and took 1.5 months to construct.

At the same time, DN Bhatt of Khadi Diors and Printers, Mumbai, who made the national flag of Khadi, said that they had to hire additional artists to make this flag. It was also difficult to make, and after it was made it was also very heavy. We completed the flag preparation and handed it over to the soldiers on time.

Let us remind you that during his Mann Ki Baat program on Gandhi Jayanti, Prime Minister Narendra Modi asked people to buy Khadi items. "Let us buy Khadi items and enthusiastically commemorate Bapu's birth anniversary," he remarked. "Today, in the 75th year of independence, we can state with satisfaction that the same respect and pride that was shown to Khadi during the freedom movement is shown to Khadi by our younger generation today," he remarked.

» List of all the presidents of India, tenure and their political journey